Did I Wish Away a Month?

Yesterday, Evan turned 8 months old.  8 months!  He has been alive almost as long as I was pregnant.  He has been alive long enough to see the rains of May, the sweltering summer heat, and now he is wondering what-the-fugg all this white stuff is.  I can't believe it.  I also can't believe how much he is changing.  He sits up on his own.  He laughs at funny things.  And he is really smart.  Smart enough to know when he doesn't want food, he doesn't open his mouth.  And when those funny things happen, he laughs with his mouth closed.  He is such a stinker.  And has crazy stinker hair. 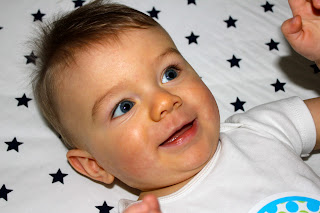 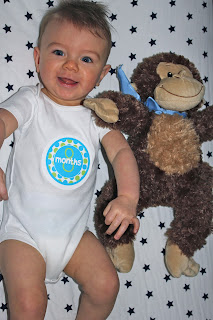 So, now I'm left wondering, where did that last month go?  How did I miss all of the time between Thanksgiving and now?  Of course there was the happy chaos of the holidays and the travel  back and forth between families.  But somehow, I spent so much time wishing that time would go fast, that I can't remember how I got from there to here.

I wanted to be finished with radiation before it even started.  I didn't like driving down there everyday.  I hated putting on the gown when I was freezing.  I hated making small talk with the techs (who were all very nice) when I was topless and showing my surgery war-wounds.  I didn't like going by myself and I didn't like counting the seconds during each radiation scan to make sure they were the same each day.  I most especially didn't like when the contractions of radiation caused my tissue expander to rub against my rib.  The pain was excruciating.  So, each day, I hurried and wished for it to be over so I could hurry and be done. But I've learned a hard lesson.  I spent so much time wishing time away, that time actually slipped away.

I now realize that I am going to have a lot of experiences in the future that I just don't want to do.  But instead of wishing the time away, I need to find a different way to cope.  I don't want to miss out on milestones, like Evan learning how to blow raspberries, because I am busy wallowing in my own sadness.    I don't know if I will be able to have any more kids and I can't afford not to embrace the moments that Evan gives me.  Even if that moment is just picking a million puffs off of floor...since Evan doesn't eat them; he throws them.
Posted by Unknown at 11:04 PM