My hair has been a major trauma for the past year and a half.  Most of you know this.  I spent quite a bit of time complaining about my hair when it was long - it's too thick, it's too heavy, it takes me so long to blow dry, it's crazy if I don't straighten it.  It's like the Hair Gods heard me and said, "Fine, snob.  We shall take it away."

So, two weeks after my first chemo, just as the doctors predicted, my hair fell out.  It doesn't fall out like it does in movies, on your pillow.  For me, it happened while I was washing my hair.  I would put shampoo in and instead of coming away with sudsy hands, I came away with full clumps of hair.  Big clumps.  Fistfuls.  On the third day of this happening, I realized that it was too traumatizing to keep watching my hair come out in clumps in the shower.  This is where I followed two pieces of advice that I regret.

1.  Several people suggested that I should cut my longer-ish hair short, so it wouldn't feel so traumatic when it fell out.  I didn't like this idea.  My hair was too thick and I have always felt like I looked crazy with short hair.  It needs weight to pull it down.  I was also thinking that if my hair was going to fall out anyway, why would I have to lead up to it with a bad short hair cut?

I should have done it.  Your hair falls out less when it's shorter and I wouldn't have had to see so much fall out in my hands.  I thought I knew what was best over anyone that provided this stupid advice to me.  This was not correct.

2. I read something that said, "The anxiety about losing your hair is worse than actually losing your hair."  I couldn't get that thought out of my head.   I thought about losing my hair day and night.  Many people will tell you that losing your hair is a superficial thought when you are facing CANCER.  Why on Earth would you care about your hair when you are fighting for you life?  I will tell you why.  Because cancer is scary and unknown and takes all pretty out of you.  And your hair is normal.  Your hair is a routine.  And people without hair look SICK.  I don't look sick in this picture above.  It was taken two weeks before my diagnosis while we were on a family vacation in Florida.  I was feeling GREAT.

The thing about my hair is that even though it was thick and heavy, it would do anything!  I could straighten it, curl it, wear it back, braid it, put it in a bun, wear it down.  And I loved that you could change your look so simply by blow drying it differently.  But, I followed the advice about the anxiety and taking charge and had Brian shave my head.

AND THAT WAS INSANE.

We stood in the shower together so we could keep the mess in one place.  We took scissors and cut my ponytail off so it could be donated to Locks of Love.  Then, Brian took the clippers and shaved my head, row-by-row.  Each piece came off.  And I cried.  And he shaved some more.  And I cried again.

After we were done, I couldn't bring myself to do anything.  I crawled into my bed, in the middle of the afternoon.  I cried and slept and cried and felt bad for myself and cried again.  And when I was done, I got up and put on a scarf.

I wore the scarf to my chemo appointments, where scarves were acceptable.  Everyone there had scarves.  But I also wore my scarf to work, where being 9 months pregnant and bald was not acceptable.  I looked ridiculous.  I participated in meetings with my giant belly and giant bald head.  I walked around in banking centers attracting way too much attention.  I went to company dinners and introduced myself to people and didn't mention why I had a huge scarf on my head. I delivered Evan wearing my scarf and didn't want any of the nurses or doctors to see me bald. 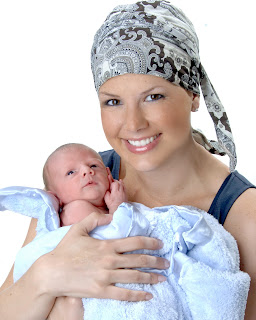 I spent Summer 2011 without hair.  No hair.  New baby.  Feeling sick.  Looking sick.  I took Evan's newborn pictures with a scarf on (the same scarf I delivered Evan in; it was my favorite one). In this picture, I had to draw on my eyebrows, since they had fallen out too, along with my eyelashes.  Imagine trying to revel in the joy of a new baby when you feel like your entire face is disappearing. Slowly but surely, I watched each piece of it go away.

It wasn't until I stopped the "heavy" chemo in September 2011 that my hair started to come back.  It was fuzzy and sparse, but it covered my head.  Even in October 2011, I was still wearing my scarf.
It was around this time that I saw an evening news show featuring Gabrielle Giffords.  Representative Giffords was shot in the head while hosting an event from meeting congresspeople on a street corner.  Her story spoke about her medical journey, sitting on national TV with a very short, choppy hairstyle.  If she could come through her traumatic journey and wear short hair proudly, I wanted to do the same thing. So, off came my scarf.

It's amazing to look back on it now and realize that I went without my scarf while my hair was so short.  Brian's hair is longer than mine!  But I wanted to fit in and be without a scarf for the first time in months. It was liberating, although, I still didn't love how it looked.

This started the growing out process.  WHAT A CHORE. Chemo-hair is not the same as non-chemo hair.  The texture is different, the way your hair parts is different and it does not cooperate.  I started following the advice of another breast-cancer survivor, to cut your hair regularly until the texture reverts back to "normal".

Since my last chemo of any kind was in June 2012, I still have a few months to go before I get my regular hair back.  I finally reached the point where my hair covers my entire head.  I've been able to style it but now it's grown out of it's "super shortness" to medium shortness.  So, that takes this very long story to the last part: The Brazilian Blowout.

The Brazilian Blowout is a chemical technique used to straighten and smooth hair.  It changes your texture!  I was willing to take a drastic measure and consequently, pay a drastic price!  I had the treatment done three weeks ago and I LOVE IT!  I am able to use a blow dryer again!  I can use a hair straightener!  And I can even get a bobby pin in it!  I am on my way to looking like a real, healthy person again.  My Brazilian blow-out was a perfect way to celebrate my cancer free news.

Pictures coming soon.  Unfortunately, I write this blog in the morning and I have morning-hair that looks just as crazy as it always did - long or short.

If I ever have to go through chemo again, I won't shave my head.  I can't stand the thought of doing that again.  To me, your hair represents health and strength and confidence.  I would like to keep it on my head, where it belongs! But my Hair Journey is a part of my Cancer Journey.  This journey has taught me humility and gratefulness and how to appreciate every moment...and every strand.
Posted by Unknown at 10:21 AM