I knew that I always wanted kids.  From the time I had my first dolls, I had them named and groomed, treating them like my own babies. My favorite doll was Molly.  She had long brown hair with big, bouncy curls and eyes that fluttered opened and closed.   When I was 6 1/2, my brother came along.  That was the next best thing; he was like MY real baby!  I could feed him, play with him and give him away when he started being a grumpy fussy baby.  Eventually, I evolved into using water balloons as babies.  My friends and I would fill up the biggest balloons we could find and then spend the summer days carrying them around in blankets.  I decided I wanted twin girls at that point and brilliantly named my balloons, Molly and Polly.  The timing of the water balloons also worked out because BK wasn't interested in being my baby, once he reached the age of knowing what the hell I was doing.

After our wedding day, I pretty much said to Brian it's time to get going on this baby thing.  We wanted our child to be close in age to Gavin and Cohen and I was already 29.  My plans of being a young hot mama were slipping quickly through my fingers, with each passing day that was pushing me towards 30.

As the story goes, we got pregnant on the first try, (encountered a bit of drama) and delivered our wonderful, bouncy Evan.

AND THEN IT STARTED.

I had no pre-warning.  I had no clue these emotions would overwhelm me.  I didn't know MOMMY GUILT would become the crux of my life!

Within hours of the birth comes the first major question: "Do you want your baby to stay in your room with you or would you like to send him to the nursery?"

Mothers of every other child say, "TO THE NURSERY YOU GO.  I NEED SLEEP."

Regardless of the decision you make, the guilt factor is dancing in front of you.  Guilt if you send your child away to get much-needed rest.  Guilt if you keep your baby in your room since you know that will make you irritated that you aren't sleeping and taking that annoyance out on your husband seems like the logical choice.

I sent Evan to the nursery; I took advice from my doctors and family that I needed rest since I had to gear up for chemotherapy. But my mommy guilt made me unable to sleep, so I walked down and stood outside of the nursery for hours at a time.  I should have saved myself the trip and just kept him next door!

This parenting stuff is no joke.  This is HARD.  It makes me FRUSTRATED and lose PATIENCE.  Of course, there are millions of things that make it worth it - all of the smiles, the first "mama", the way that your child holds your face.  I could go on and on.  Because those are the things people talk about.  The beauty.  The memories.  The love. 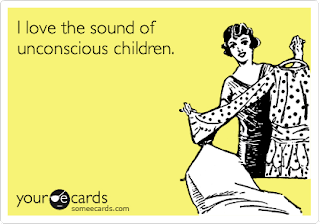 I don't remember anyone telling me you will feel like shit when your baby is sick and you have to go out of town for a business trip.  Evan's temperature had hit 104.8 when I was sitting in the airport, about to board my flight to Dallas.  I was on the phone with Brian, who was trying to assure me it was okay to go.  But all I could hear was Evan crying in the background.  That saddening noise was muffled only by my inside voice yelling, "YOU ARE THE WORST.  Why are you abandoning your sick child?"  So here was my thought process:

1. I have a very flexible job and they don't ask me to travel that much.  Therefore, I feel very obligated to keep my commitments since they happen so few and far between.
2. Brian is very capable.
3. Nana Moni was there.  She is not only capable but nurturing and loves Evy just as much as anyone.

I got on the plane.  Crying.

Do you think there were any men on the plane crying because they were leaving their sick child at home?

A combination of Tylenol and Ibuprofen knocked that fever down to 100 degrees within a few hours.  By the time my plane landed, Evan was toddling around the house again.  I was able to sigh with relief.  But it didn't make it easier to focus and for much of my three-day trip, I spent a lot of time trying to juggle in phone calls to home for status updates.  I felt distracted and discombobulated.  Feelings that now accompany me to work frequently.


These are just a few examples but they process is non-stop. I have a meeting in Detroit on Halloween.  I'm trying to figure out how I can make the meeting but still see the kids in the school parade.  And not miss Evan's first time trick-or-treating. And get treats for our house.  And by the way, we don't have one single Halloween decoration up.

Brian and I are on this whirlwind trip right now, having been in NYC for a few days and now heading to Denver for a long weekend.  It's magical and wonderful and we NEED this time together.  We are better parents (and people) when we have time to enjoy each other.  I told Brian it was so much fun to have dinner together with a group of people and see him in a different light.  He was charismatic and funny and charming and entertaining; he wasn't Daddy and he wasn't someone to help me get the list of chores done before we crashed for bed. He was MY HUSBAND.  And I LOVE HIM.  And it's such a nice realization to see that we can still enjoy and have fun with each other when we leave the rigor of everyday.

BUT I FEEL BADLY!  I feel badly for leaving Evan behind.  I feel badly that I am having fun without him.  I am feeling badly that it feels GOOD to get away from work and the house and responsibilities.

But we get up every morning.  We commit to making each day better than the previous one (unless your previous day was kick-ass and you feel like settling a bit). We say we will yell less, have more patience and kiss and hug instead of pull out hair.

Here is one of my favorite quotes on motherhood: "There is no way to be a perfect mother, and a million ways to be a good one." - Jill Churchill.  So, we'll just keep doing the best we can.
Posted by Unknown at 6:57 PM