Back in the Running Game!

Well, yes, yes you can.  Because that's exactly what it was!

Saturday, May 11 was my entry back into the running world.  I was so excited to participate in the River Bank Run in Grand Rapids.  I did a few races pre-cancer; I had run fairly consistently but usually 3 miles at a time.  Or if you want to get crazy, sometimes I did four miles.  I ran a 5K race, a 10K race, the Reeds Lake triathlon.  But wasn't ever the "legit" runner that I wanted to be.

I knew that I wanted to set some significant goals for myself in 2013;  get in better shape, become a better runner, get some strength (and muscle) back in my arms.  Recovery from my surgery in December 2012 was a perfect motivator to get going again.

But it was meeting Jori that gave me the kick in the pants I needed.

Lacey called me in the middle of March to tell me about Jori.  Lacey, an RN, works with Tina, an RN. Tina was telling Lacey about her cousin, Jori - a 35-year old mother of four, who was diagnosed with breast cancer.  Lacey thought that Jori and I had similar stories and suggested we connect.  Jori and I exchanged a few e-mails and then chatted on the phone.  She had just been diagnosed, after finding a lump while breast-feeding her youngest daughter, Joss. We talked about doctors, procedures, the stress of the diagnosis and treatment plans.  Jori told me that she was getting her PET scan the next day.

I was shocked and stunned when Lacey called two days later to tell me that Jori got the results of her scan.  The cancer was not only in Jori's breast, but she had tumors on her spine.  Her cancer had metastasized to her bones.

Hearing about Jori's diagnosis rocked me to my core.  I was sent back into the time of my own diagnosis...I cried...I was angry...I grieved.  I did not understand how such a beautiful wife and mother of four could be burdened with such a disheartening diagnosis.

I went for a run that weekend - a four mile run - and decided that I needed to take action.  I needed to be there for Jori.  Brian needed to be there for her husband, Tim.  We needed to help provide support to them based on the lessons we learned from our own journey.  But I also wanted to find a way to spread awareness...and do something to let Jori know how loved she is and that no other 35-year old mom of four should ever have to hear the words, "Stage 4" cancer.

And then it clicked.  During our first conversation, Jori shared with me that she was a runner.  She ran for Cedarville College and had run for most of her life.  She had even confirmed with her oncologist that continuing to run would be safe and not do any damage to the tumors on her spine.

So, I would run for Jori.  I would make the River Bank Run 10K my comeback run and run for my friend.  And I would ask my friends to run. And Jori's friends to run.  And we would all run together and be a sea of supporters.

I reached out to BK and his girlfriend, Maya.  The creative genes in the family.  I asked for help.  I needed a logo for Jori.  I wanted something that showed we were fighting behind her. And this is what Maya made: 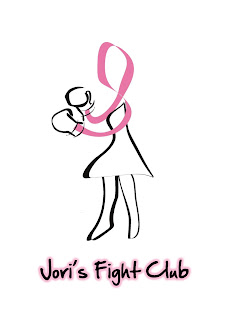 Is that not the cutest logo EVER?  I love the pink ribbon, I love the boxing gloves, I love the dress.  Maya is so fabulous.

Jori's dear friend, Emily, helped me get going.  We e-mailed everyone we could think of and asked them to join us in Jori's honor.  And while we were doing that, Jori shared with me that SHE would be running the 10K too.  Running the 10K while getting some of the most intense chemotherapy they make.

So, if I wasn't motivated before, I became HIGHLY motivated after Jori shared her goals with me.

I dragged Brian into this and convinced him to run too.  And we all started training.  On Saturday, we had over 40 runners as a part of Jori's Fight Club.

And Jori and I were joined by our Survivor Sisters.  Amelia made this her comeback race too - she was diagnosed in March 2011, just like me.  Except she is two years younger than me and also had Stage 4 breast cancer.  But she's another INCREDIBLE fighter and is fighting everyday for the strength and stamina of her pre-cancer self.  And Lori ran with us - it's no biggie - she has run three half-marathons before - all post-cancer.  Lori is about to celebrate her five-year cancer-versary.  She's an inspiration to all of us and where we can be someday too.


Jori received amazing news today - the chemo is working, the tumors are shrinking and she is responding so very well.  But it's Jori's courage...and the strength of Amelia...and the sweet enthusiasm of Lori...and the ever supportive encouragement from Brian...that allowed me to get back into the running game.

I'm so proud of myself for finishing this race.

And I'm doing a fun race next weekend with Gavin - a 5K Color Run.

I'm doing the Crim in Flint in August - my first 10 mile race.

All in preparation for our FANTASTIC Disney Half-Marathon weekend.

I can't wait to run more races...and run with my Survivor Sisters...and run to say, "I did it".  Running is making me feel strong and empowered and confident.  I'm back in the game!
Posted by Unknown at 9:30 PM